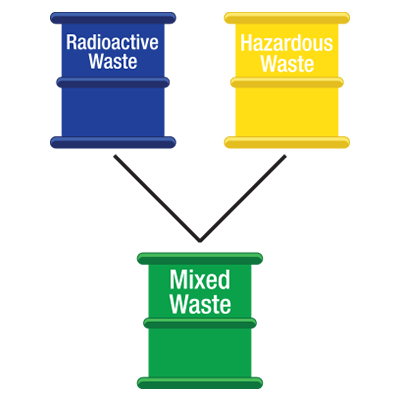 What is Mixed Waste?

When a waste material contains radioactive as well as hazardous components it is considered a mixed waste. According to the EPA, “mixed-waste can be generated anywhere radioactive materials are used in processes that also involve the use of chemically hazardous materials.” Generally, however, they come from one of two sources. The first is low-level mixed-waste which is created by commercial users. The second is “low-level, high-level, and transuranic mixed-waste generated by the Department of Energy [source],” both are explained in detail below. Because mixed waste includes both radioactive and hazardous material the treatment and regulation are even more complex than when handling either type of waste individually.

According to the EPA, “most commercially-generated (i.e., non-DOE) mixed waste is classified as low-level mixed waste (LLMW). LLMW is waste that contains low-level radioactive waste (LLRW) and hazardous waste. LLRW is defined as any radioactive waste that is not high-level radioactive waste, spent nuclear fuel, or byproduct material. LLMW is generated commercially in all 50 states at industrial, hospital, and nuclear power plant facilities in a number of processes such as medical diagnostic testing and research, pharmaceutical and biotechnology development, pesticide research, and nuclear power plant operations.”

As mentioned above, the United States Department of Energy produces three different types of mixed waste. The EPA details the three categories as:

Mixed waste is regulated by both the Resource Conservation and Recovery Act (RCRA) and the Atomic Energy Act (AEA). Generally the regulatory bodies agree on requirements but if they do not AEA takes precedence. That said, the Department of Energy is self-regulating with orders applying to both DOE sites and contractors. These sites must comply with the Federal Facilities Compliance Act (FFCA) which was made into law in 1992.

If you would like further information about mixed waste visit the EPA article on the subject, Mixed Wastes.