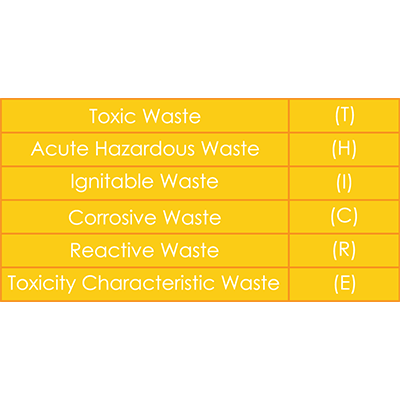 There are four different criteria the EPA utilizes as a basis for deciding whether or not to list a waste as hazardous. And while it may seem like they would correspond to the four different lists wastes can be split into, they are not directly related. According to the EPA the four criteria are:

The EPA can decide to list a waste as hazardous for any and all of those four reasons. The majority of listed wastes, however, fall into the toxic waste category. According to the EPA, “to decide if a waste should be a toxic listed waste, EPA first determines whether it typically contains harmful chemical constituents. Appendix VIII of Part 261 contains a list of chemical compounds or elements which scientific studies show to have toxic, carcinogenic, mutagenic, or teratogenic effects on humans or other life forms. If a waste contains chemical constituents found on the Appendix VIII list, EPA then evaluates 11 other factors to determine if the waste stream is likely to pose a threat in the absence of special restrictions on its handling. These additional considerations include a risk assessment and study of past cases of damage caused by the waste.”

The second most common reason for a waste stream to be listed it that it is an acutely hazardous waste. The EPA designates those materials which contain constituents found in Appendix VIII, which are fatal to humans or animals in small doses, as acutely hazardous.

In order to indicate why a waste was listed as it was the EPA assigns a hazard code to each waste listed on the F, K, P, or U lists. These codes are:

The different codes assigned to wastes affect the regulations that apply to handling them. Acutely hazardous wastes (H) for example are subject to stricter management standards than most other wastes.

All information for this blog post was gathered from the EPA document, “Introduction to Hazardous Waste Identification.” As always, this blog post is not intended to be comprehensive and it is always best to check with the EPA and local government for full, up-to-date, rules and regulations.