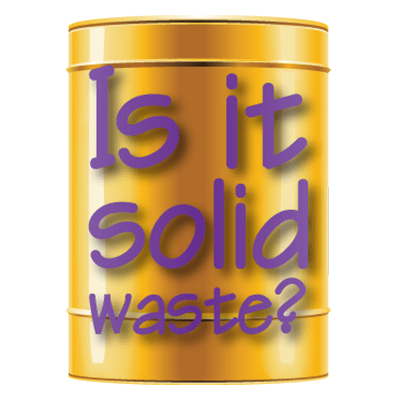 What is a Solid Waste?

When you hear the term “solid waste” you probably think it means exactly what it sounds like, a waste that is solid as opposed to liquid or gas. Interestingly enough though that is not what it means at all. The legal definition of “solid waste” actually has nothing to do with physical form. Rather, it deals with whether or not the material is a “waste.”

The definition found in 40 CFR §261.2 is a little less extensive. §261.2 defines a solid waste as any material that is discarded by being abandoned, inherently waste-like, recycled, or a military munition identified as a solid waste. These four categories are explained further below.

What is an “abandoned waste?”

What does it mean for a material to be “inherently waste-like?”

Regardless of whether or not they are recycled in some way, there are some materials that are always considered solid wastes under §261.2. Because the materials may still pose danger to human health or the environment after recycling, they are considered inherently waste-like and do not qualify for any type of recycling exemptions. According to the EPA, “examples of inherently waste-like materials are the dioxin-containing listed wastes F020, F022, F023, F026 and F028.”

What kinds of materials are recycled?

The EPA has three categories for a “recycled material.” According to §261.1 a material is recycled if it is used, reused, or reclaimed. Each of the three categories has a specific regulatory definition. So, a material is reclaimed if it is processed to recover a usable product or if it is regenerated. An example would be regeneration of spent solvents. A material is used or reused if it is either used as an ingredient in an industrial process to make a product, such as distillation bottoms from one process being used as feedstock in another process, or if it is employed as an effective substitute for a commercial product. For example, spent pickle liquor can be used as a sludge conditioner in wastewater treatment.

How and when do military munitions become solid waste?

Used military munitions become solid wastes when they are buried or landfilled onsite, or when they are removed from their landing spot for subsequent management (storage, reclamation, treatment, or disposal) off-range.

All information for this blog post was gathered from the EPA Document, Definition of Solid Waste and Hazardous Waste Recycling. As always, this blog post is not intended to be comprehensive and it is always best to check with the EPA and local government for full rules and regulations.