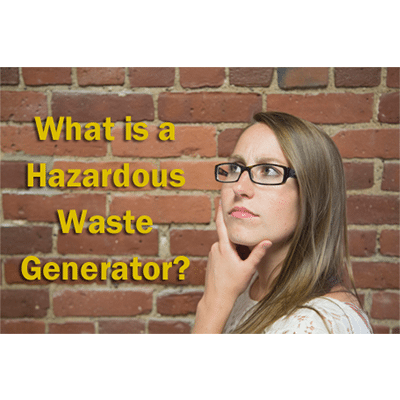 What is a Hazardous Waste Generator?

The Resource Conservation and Recovery Act (RCRA) is responsible for regulating hazardous waste from its point of generation through its final disposal. This “cradle-to-grave” system begins with hazardous waste generators. The EPA has developed generator standards for several aspects; from on-site accumulation of hazardous waste, to manifesting, to labeling, recordkeeping, and reporting.

According to section 260.10, a generator is “any person, by site, whose act or process produces hazardous waste, identified or listed in Part 261 or whose act first causes a hazardous waste to become subject to regulation.” In order to make this statement more palatable, it helps to break it down by three integral terms you will need to understand.

The first term we need to look at is“by site.” This refers to where a hazardous waste is generated. It is important to note, however, that the regulations do not expressly define the word site. Since the EPA tracks hazardous waste generation by “individual generation site,” they issue unique identification numbers to each generation site. To do this they issue unique identification numbers to identify generators by site.

This is important because one owner or operator can have several sites being regulated. For example, if one owner/operator has 4 buildings on a single plot of land, each producing a hazardous waste, those four buildings can all have the same EPA identification number. If that same owner/operator has 4 buildings on four different pieces of property, however, each will need its own EPA ID number.

So, each individual “site” requires its own identification.

The second important term is “person.”  260.10 defines person as “an individual, trust, firm, joint stock company, federal agency, corporation (including government corporation), partnership, association, state, municipality, commission, political subdivision of a state, or any interstate body.” As you can see, the definition is much more far reaching than you might anticipate. The definition of person as it relates to RCRA encompasses any entity involved with a process that generates a hazardous waste.

The third, and final, part to look at is the definition of the phrase “act or process.” According to a training module available from the EPA, “because a generator is defined as the person whose act or process first causes a hazardous waste to become subject to regulation, sometimes the generator of a waste may not necessarily be the person who actually produced the waste. For example, if a cleaning service removes residues from a product storage tank excluded in §261.4(c), the person removing the residues is the first person to cause the waste to become subject to regulation, not the owner of the tank (i.e., the person who produced the waste).” This example is also a good illustration of co-generators.

Co-generation happens when more than one person can be considered a generator. In the cleaning example, even though the person removing the waste is not the owner/operator, he or she can still be considered a generator since they were the first person to cause the waste to become subject to regulation. In that same vein, the owner/operator is responsible because, “the act of operating the unit led to the generation of the hazardous waste.”

Once it has been determined that a person is a generator, they must be classified into one of three categories. I think we’ll save that for another post though!

All information for this blog post was gathered from the EPA document, “Introduction to Generators.”  As always, this blog post is not intended to be comprehensive and it is always best to check with the EPA and local government for full, up-to-date, rules and regulations.