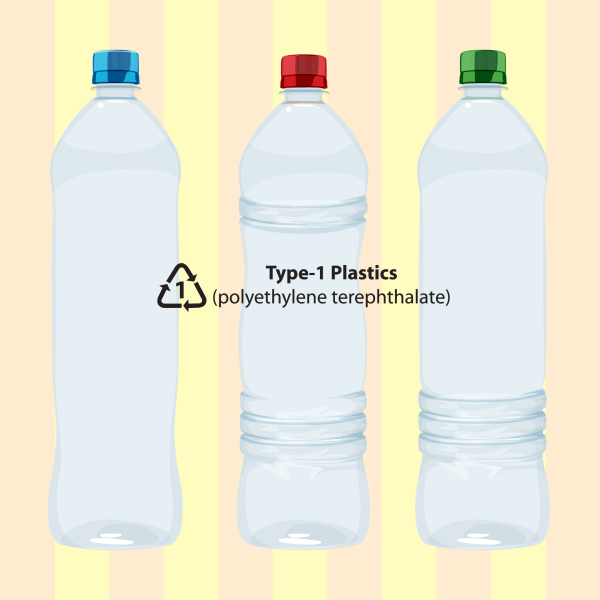 Plastic Identification: How to Categorize Your Waste

Information for this weeks post was found via the The Green Guide. Below, you will find the different classifications of plastic, common items in each category, and information about recycling. To read more from The Green Guide Network click here.

Plastic #1: Polyethylene terephtalate, also known as PETE or PET.  Usually clear in color, the vast majority of disposable soda and water bottles are made of #1 plastic. This plastic is considered generally safe and is picked up by most curbside recycling programs. However, the porous nature of its surface allows bacteria and flavor to accumulate, so avoid reusing these bottles as makeshift containers.

Plastic #2: High-density polyethylene, or HDPE.  Most milk jugs, detergent bottles, juice bottles, butter tubs, and toiletries bottles are made of HDPE. Usually opaque in color and picked up by most recycling programs. This plastic is considered safe and has low risk of leaching.

Plastic #3: Polyvinyl chloride, or PVC. It is used to make food wrap, bottles for cooking oil, and the highly common plumbing pipes. PVC, although tough in terms of strength, is not considered safe to cook food near. PVC contains softening chemicals called phthalates that interfere with hormonal development. Never cook using food wrap, especially in a microwave oven. This plastic is rarely accepted by recycling programs.

Plastic #5: This is polypropylene. Common items produced with it include yogurt cups, medicine bottles, ketchup, syrup bottles, straws and similar wide-necked containers, as well as water bottles with a cloudy finish. This plastic is also considered safe, and is increasingly being accepted by curbside recycling programs.

Plastic #6: Polystyrene, or Styrofoam, from which disposable containers and packaging are made. Also found in disposable plates and cups. Overwhelming evidence suggests that this type of plastic leaches potentially toxic chemicals, especially when heated. Try to avoid the use of #6 plastic as much as possible. It is difficult to recycle and most recycling programs won’t accept it.

Plastic #7: This category basically means “everything else” and is composed of plastics that were invented after 1987 – the use of plastic in this category is at your own risk since you don’t know what could be in it. Polycarbonate falls into this category, including the highly toxic BPA. Products produced include baby and water bottles, sports equipment, medical and dental devices, CD’s, DVD’s, and even iPods. It is wise to dispose of any food or drink related product that is known to contain BPA. It is difficult to recycle #7 plastic and most curbside recycling programs won’t accept it.

Where do you recycle your plastics?