When you meet Chris Patchon, who manages Heritage Environmental Services’ (HES) Indianapolis waste treatment  facility and RCRA Subtitle-C hazardous waste landfill in Roachdale, his positive energy and passion quickly inspire admiration. What keeps Chris going? What makes him so successful? We recently followed Chris around the plant to find out, and learned eight things that keep Chris happy, motivated, and driven to tackle whatever comes next.

These could be good reasons for you to start a career at a Heritage Group company, too! heritage-enviro.com/careers

“I’m a local kid,” said Chris, who grew up just down the street from where he works today. “I walked by the plant going to football practice.” Years later, at age 21, Chris joined the plant as a material handler in drum operations, working the night shift. He frequently signed on for overtime, occasionally working double shifts.

It didn’t take long for leaders to spot Chris’s dedication. Two years later, the manager of a Heritage plant in Charlotte, North Carolina, asked Chris to relocate from Indy to Charlotte and run the drum operation there. “I was an hourly employee at the time,” Chris said. “I asked, ‘Why me?’ He said, ‘Why not you?’” Chris’s wife, Jennifer, had just given birth to their son, Drew, and didn’t want to leave town. “I said ‘no’ at first,” Chris admitted. But when Jim Green, the president of the company at the time, called and asked him to fly to Charlotte for a visit, Chris took him up on the offer. Not long after, Chris and his young family made the move south. “It turned out to be the best decision I’ve ever made in my career,” said Chris, who eventually took over all plant operations in Charlotte.

If you ask Chris what he loves most about his job, the first thing he’ll say is: the people. He admires Jeff Laborsky, Chief Executive Officer of HES and leader of Heritage Research Group. “Jeff’s a people person, and he’s committed to our company’s mission to protect human health and the environment,” Chris said. “That commitment at the highest levels trickles down — it’s genuine.”

Winde Hamrick, Executive Vice President of HES, once managed the plant Chris runs now. She mentored Chris when he returned from Charlotte in 1999. Even though there were no manager positions open, Chris and Winde set a goal for his future that included professional development opportunities. It took almost four years for the operations manager spot to open up, and when it did, Chris stepped in and kept growing. Winde continues to help guide Chris’s career today. “I’m blessed to have her as a mentor,” he said. “We have a wonderful relationship.”

“I am very proud to help run successful business units in my role as Plant and Landfill Manager.

I like to say I have a master’s degree from Heritage University,” Chris said with a smile. “Heritage offers so many resources — especially mentors and coaches — you continually learn on the job.”

On top of that, Chris has taken part in leadership training, including weeklong programs at the University of Chicago and the University of Notre Dame. “It was an awesome experience!” he said of undergoing the trainings. “Heritage invests in people. It’s something we do well here.” Chris has also earned his Indiana Certified Wastewater Class D license while working for Heritage.

Working at a private company with a family-type atmosphere leads to teamwork and collaboration, which in turn sparks new ideas. “We’re a very creative company,” Chris said. “So many ideas have grown into new businesses. It has been cool to watch it happen.”

Chris appreciates that leaders frequently ask for his opinion. “They don’t have to,” Chris noted. “But the fact that they engage with operations at all levels means a lot to me.”

That engagement and collaboration presents opportunities for everyone. “It’s not unusual for employees to talk to the president of the company,” Chris said. “You’re never ‘just a number’ here. You’re part of a team. And it’s a winning team.” 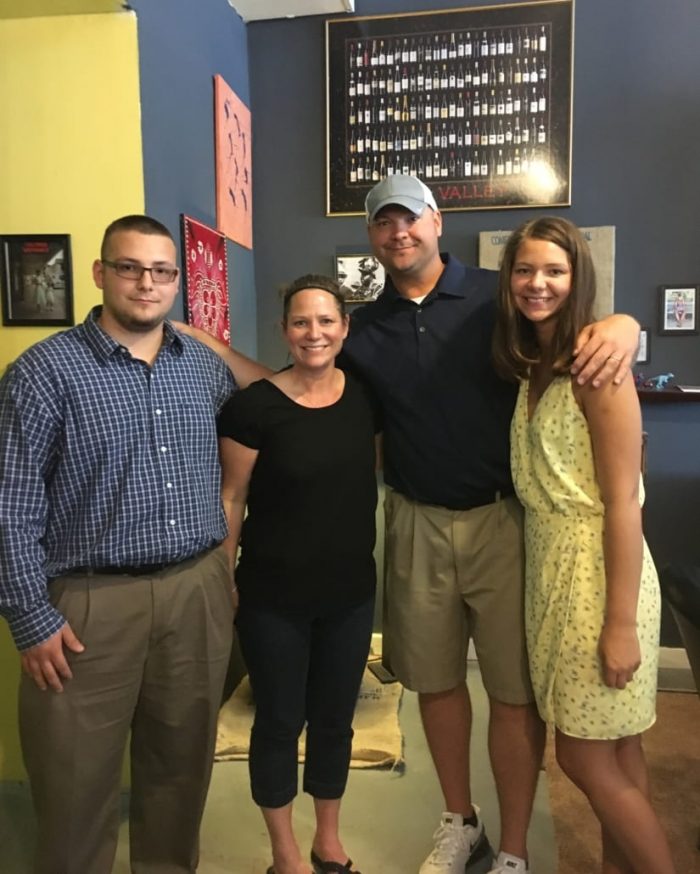 A devoted family man, Chris has been married to his wife, Jennifer, for 26 years — as long as his tenure at the company. He’s the father of a son, Drew, and daughter,  Hannah, both college grads pursuing careers in the pharmaceutical and medical fields.

Chris said his parents, Brad and Debbie, kindled his focus on values like loyalty and dedication. Brad, Chris’s stepdad, who worked for the City of Carmel’s wastewater division, modeled hard work. “I watched him get up in the wee hours of the morning to go to his job. And he raised two kids who weren’t his own. He didn’t have to do that. He set the foundation of always doing the right thing and putting in the effort.”

The Heritage Group’s core values of honesty, integrity, and fairness resonate with Chris. “Those values align with who I am as a person,” he said.

He’s also happy about how his career at HES has supported his family. “Working at Heritage has given me a wonderful life. It allowed me to put my kids through college; to take my family on vacation. I didn’t get to do those things as a child,” Chris added. “I’m forever grateful.” 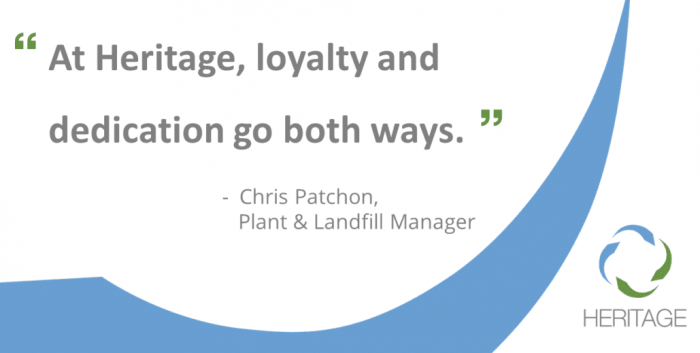 When Chris is looking for new employees, he seeks “loyal, dedicated people who are aligned with what we do,” he said. “We have jobs here, and we also have careers.”

Chris’s loyalty and commitment to HES and his team have helped make him successful in his own career. That’s because his leaders look out for him and his future. “At Heritage, loyalty and dedication go both ways,” he said.

When Chris walks through his plant with a group of visitors, he greets each worker by name, quickly pointing out their tenure with the company and their personal story. Bart Bicknell, a chemical treatment supervisor and 20-year HES employee, served as a tank commander in Desert Storm. John Boyne, an operator in chemical treatment who has worked at Heritage for 27 years, is a “great employee,” in Chris’s book. Chris recently recommended Eric Chris, the plant’s operations manager, for a promotion, which Eric earned. He begins his new job running the Roachdale landfill  later this year. “It’s a pay-it-forward mentality,” said Chris, who’s proud of the fact that many Heritage employees and leaders launched their careers at the plant where he works now.

At Heritage Group companies, the freedom to learn and grow is real. “The opportunities to do great things are there,” Chris said. The different companies within The Heritage Group give employees freedom to move around; “if you have the drive and ambition to do great things, you can do it,” Chris emphasized. “I started at the bottom and worked my way up. It takes time and effort, but if you work hard, you can get where you want to be.”

There’s Something About Chris

The Heritage Group and Heritage Environmental Services (HES) open doors for employees of all stripes, but a few of Chris Patchon’s qualities make him especially successful.

Chris, who has an athlete’s energy and positive outlook, played football in high school and college. The former linebacker’s drive to protect his people — combined with his quick thinking at every turn — make him a perfect fit for the demanding work of running a 24/7, all-seasons operation.

Like any talented athlete, Chris also likes to win — and he looks for similar qualities in potential employees. “I sense the desire to win,” he said. “High-potential employees rise above failure and always look for a solution.”

Chris has also learned that each employee has their own spark. “There’s an art to how you approach and motivate people,” he said. “You’ve got to take the time to get to know them.” 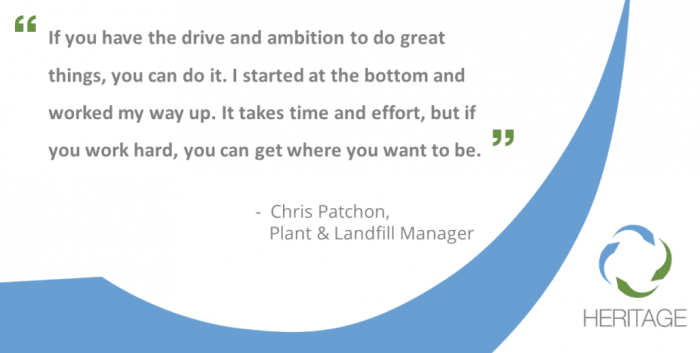 His boots are on the ground.

Chris is proud to say that every leader on his management team started from the ground up — just like him. “People respect you when you’ve done the work they do,” he said. “It’s easier to relate to a boss who has been in your shoes. As supervisors, we don’t forget where we came from.”

He cares about his people.

Since he became plant manager, Chris has instilled new policies that do more to give employees a voice. On their first day, after  they have met the safety manager and walked the facility, new employees meet with every member of the management team. Chris’s personal open-door policy shows his genuine investment in each employee. “I don’t care how long someone’s been here or who they are. Everyone’s welcome to come to my office for a conversation about anything,” he said. “I want people to feel okay about talking to leadership. I tell people who stop by, ‘Hey, I’m no different than you are.’ That’s how we build a relationship.”