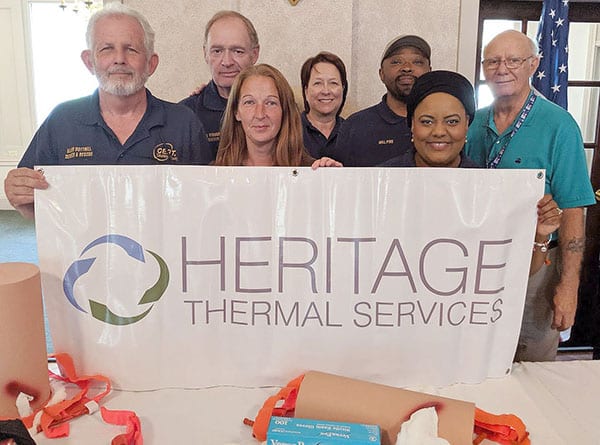 EAST LIVERPOOL, Ohio – Heritage is dedicated to health and safety through emergency preparedness at all its locations. That commitment also extends into the communities where Heritage operates.

When officials of the Columbiana County Community Emergency Response Team, or CERT, expressed their intent to introduce the trauma-awareness program called Stop the Bleed, officials at the Heritage Thermal Services incineration facility here did not hesitate to respond. The company donated $3,000 so the CERT could acquire training kits and related equipment.

“No matter how rapid the arrival of professional emergency responders, bystanders will always be first on the scene,” Debra Moore, CERT program manager, said. “Those nearest to someone with life-threatening injuries are best positioned to provide first care.”

The Stop the Bleed program is a collaboration between the Department of Homeland Security and other agencies. Stop the Bleed trains ordinary citizens who may be present and a single- or mass-casualty incident to stem severe bleeding in the victim or victims before professional medical- and emergency-responders arrive on the scene. More information is available at: Stop The Bleed.

The CERT announced the donation during a recent meeting of the East Liverpool Rotary Club of which Heritage is a member. Team members also demonstrated the proper use of tourniquets and other first-aid resources to the Rotarians.

According to the CERT: “In Columbiana County, we work under the Emergency Management Agency (EMA). We do not self-deploy for emergencies; instead, we make sure that our own families and neighborhoods are safe and deploy when called out by the EMA.”